More information about advantages and disadvantages of breast cancer screening

The principle of breast cancer screening is to screen many healthy women to find breast cancer among a few in the hopes of avoiding breast cancer death among some of these women.
Last updated: 1/6/2021

However, we know that breast cancer screening also carries some risks, such as the risk of finding slow-growing breast cancer tumours which one did otherwise not need to know about, so-called overdiagnosis. Overdiagnosis may lead to overtreatment.

Below you can find more detailed information about advantages and disadvantages of breast cancer screening.

The reduction is probably due to a combination of how mammograms can find breast cancer at an early stage of development, and better treatment methods at the breast centres (2)

How many breast cancer deaths are prevented because of BreastScreen Norway?

There is debate over how many women are saved from dying of breast cancer because of BreastScreen Norway. Different data and ways of understanding the data lead to different results.

The Cancer Registry of Norway estimates the following (based on 1,3):

This means that an extra 4 out of 1000 women who attend all of the BreastScreen Norway examinations, will be saved from dying from breast cancer as a result of the programme.

You can find the basis for the calculation here (in Norwegian only).

The research-based evaluation of BreastScreen Norway also includes an estimate of the number of people who are saved from dying of breast cancer as a result of the programme (4).

This calculation is based on everyone who is invited to the BreastScreen programme – not just those who actually come to screening.

Results based on statistics from all women invited are often referred to as the societal effect of the screening programme. These calculations include both women who attend and those who do not attend. The estimate of the number of women saved from dying of breast cancer will therefore be lower than if the same estimate only included those who actually attended the screening.

The government’s evaluation suggest that if 1000 women are invited 10 times from the age of 50 onwards as part of BreastScreen Norway, we can expect that approx. 3 of them will be saved from dying of breast cancer.

When breast cancer is detected through BreastScreen Norway, the disease is often in an early stage. Women with small tumours that have not spread are more likely to keep their breast after surgery than in cases where the cancer has spread to lymph nodes in the armpit or to other parts of the body.

How much greater is the chance of saving the breast during surgery?

Data from BreastScreen Norway show that among 1000 women who had breast cancer detected through the programme, around 700 were able to keep their breast after surgery.

For women of the same age group who do not participate in the programme, as well as women with breast cancer detected in the interval between two screening examinations, about 500 out of 1000 women were able to keep their breast after surgery.

More women now have breast-conserving surgery, regardless of how the tumour was found.

Risk of a "false alarm"

When evaluating the mammograms, it can sometimes be difficult to differentiate between harmless changes and changes that indicate breast cancer or a precancerous breast tumor. Follow-up assessments (tests) will then be necessary.

How many women will experience a false positive screening result?

Data from BreastScreen Norway shows that when 1000 women participate in the programme, around 30 of them will be called back for follow-up tests. After more thorough examinations, 24 of these women will be informed that they do not have breast cancer.

Women with breast implants are more likely to be called back for follow-up tests, as some implants can make it difficult to show all the glandular tissue in the mammograms. This might require new images and/or an ultrasound examination.

Calculations from the Cancer Registry of Norway show that if 1000 women attend all 10 screening invitations they receive from BreastScreen Norway, 200 of them will have at least one false positive result during this time (5). 160 of these 200 will need to have new mammograms or undergo an ultrasound examination, while the other 40 women will also need a biopsy (needle extraction of cells).

One of the main problems with overdiagnosis is that we do not know which tumours these are, or if they will become more or less aggressive over time. We do not have any good methods for telling which cancers are slow-growing tumours which may not need treatment, and which cancers can develop into life-threatening illness. That is why all women with breast cancer are offered treatment.

This means that a woman may be diagnosed with and treated for a breast cancer which might otherwise not have become a health problem for her. This risk should be considered against the potential benefits of participating.

How many women are overdiagnosed as part of BreastScreen Norway?

While researchers agree that overdiagnosis occurs, there is still no agreement on how often it happens and how certain the estimates are. As we do not know which tumours are overdiagnosed, we need to make a number of assumptions, for example about how early the tumour has been found and at what speed it is growing. Also, use of different data and statistical methods lead to different results. All of this means that we are not sure how often overdiagnosis happens, neither for BreastScreen Norway nor for screening programmes in other countries.

The Cancer Registry of Norway estimates the following (based on 1, 3):

This means that if 1000 women get screened every time they are invited to the BreastScreen Norway, about 12 of them will be overdiagnosed as a result of their participation.

You can find the basis for the calculation here (in Norwegian only). 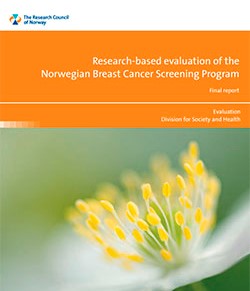 The research-based evaluation of BreastScreen Norway also includes an estimate of the number of people who are overdiagnosed because of the programme.

This calculation is based on everyone who is invited to the BreastScreen programme, not just those who come to screening.

Results based on statistics that include all the women that have been invited, is often referred to as the societal effect of the screening programme. The calculations will include both women who attend and those who do not attend. The estimate will therefore be lower than if the same estimate only included the women who actually attend screening.

The research-based evaluation suggested that if 1000 women are invited 10 times from the age of 50 onwards as part of BreastScreen Norway, we can expect that about 14 of them will be overdiagnosed (4).

In mammography, x-rays are used to make images (mammograms) of the breasts. X-rays have a certain amount of energy, and some of this energy will be deposited in the breast during the mammography examination. We say that the breast has received a dose of radiation.

Since all X-ray examinations are believed to carry a certain radiation risk, we must make sure that X-rays are done for good reason. An overall evaluation on this risk and potential benefits has been made for BreastScreen Norway (6).

How big is the risk that the radiation dose from attending BreastScreen Norway will lead to the development of breast cancer?

The effect of radiation on the body depends entirely on the size of the radiation dose from the X-ray. For high doses, there is broad consensus that X-ray radiation is a risk factor for developing cancer (7). However, the radiation dose from the X-rays used in breast cancer screening is so low that it is far more difficult to document and understand the effect on the body. For this reason there are differing views and much debate surrounding the possible cancer risk linked to low doses of radiation from mammography screening (8).

We do not know what exactly makes a cell go from being a normal cell to a cancerous cell. Therefore, it is impossible to identify and count the exact number of cancers that may be caused by X-rays used in breast cancer screening. Instead, we need to use models and statistics to understand the risk of developing breast cancer from the X-rays used in BreastScreen Norway.

Women may feel worry and anxiety in connection with having a mammogram, both during the initial screening, and especially if they are called back for more testing (4).

Such feelings are common while waiting for results, and can be different for each woman – both in terms of what they feel and how long the feeling lasts.

Studies showing that women often feel severe stress when they are called back for follow-up tests indicate that the psychological strain will grow less over time.

Studies from BreastScreen Norway also show that the psychological strain is greater for the first examination, and grows less in subsequent examinations

Breast cancer can also be found between two mammograms.

In most cases, these are fast-growing tumours that are too small to be found in a mammogram, but grow fast enough to present symptoms, for example a noticeable lump in the breast, before the next screening mammogram is due.

In other cases, the tumour may not have been seen in the mammograms. This can happen because of where it is located in the breast, because it is hidden in dense glandular tissue, or for other reasons.

How often is breast cancer found between two screening mammograms?

Data from BreastScreen Norway show that if 1000 women attend the programme, 2 of them will be diagnosed with breast cancer between two scheduled mammographic screenings (10).

This means that one in four breast cancers found in women who attend BreastScreen Norway, is found between two breast cancer checks.

Women must always check with their doctor if they notice a new lump or other new changes in their breast, even if they just had a mammogram.

The Research Council of Norway has conducted a research-based evaluation of BreastScreen Norway on behalf of the Ministry of Health and Care Services.

The report concludes that BreastScreen Norway performs as expected, and that the programme has reduced breast cancer mortality.

From a societal perspective, the cost-effectivness is within the range defined as acceptable for health services.

The report also underlines that each invited woman has to weigh the information on benefits and harms based on her own values, health and life situation when deciding whether or not to attend BreastScreen Norway.