Cancer development in Norway is relatively stable, with a small increase in incidence each year. In 2021, 36 998 new cancer cases were registered in Norway. Cancer mortality is declining, and survival is increasing.

Cancer is a widespread disease group that affects many, either directly or indirectly as relatives.

Before the age of 75, one in three Norwegians has been diagnosed with at least one cancer diagnosis, and in the entire population there are now almost 300,000 people with cancer in their medical history (316.145 people as of December 31. 2021).

Although more and more people get cancer, there is also an increase in those who become fully recovered, and many of the people with cancer live longer and have a higher quality of life than earlier. This is due to a combination of prevention, earlier diagnosis, and an increase, improvement and adaption of methods of treatment for the various types of cancer.

For some cancers, this has led to nearly everyone surviving, and even those with advanced disease in these groups have good survival prospects.

For other cancers, however, there have been few therapeutic breakthroughs. When it comes to cancers such as pancreatic cancer, lung cancer and liver cancer, it is still the case that only a small proportion of those who become ill survive.

There are three times as many cases of cancer diagnosed now than 50 years ago, and more men than women are getting cancer.

The most common cancers 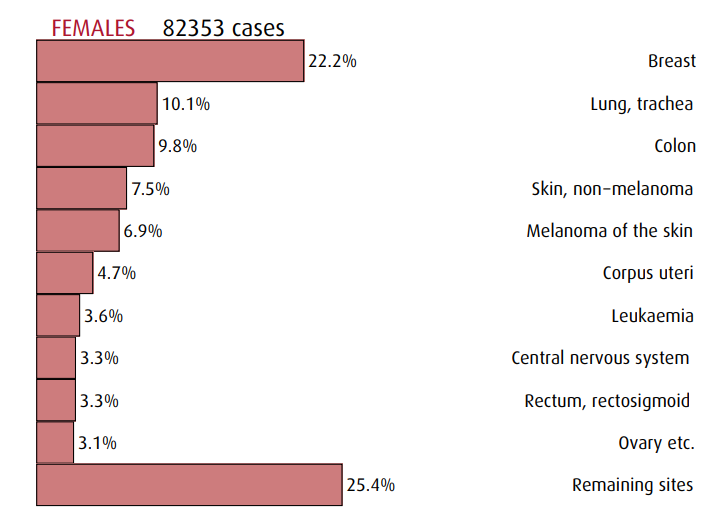 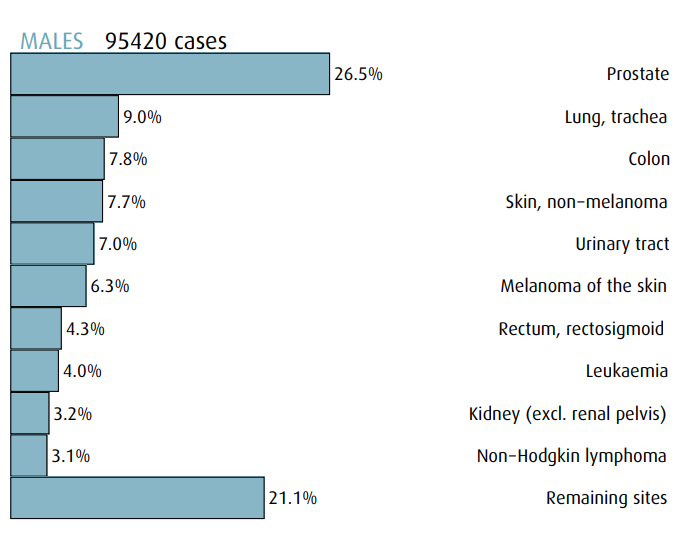 Cancer affects mostly the elder. Three out of four diagnosed cancer cases are men and women over the age of 60. In Norway, therefore, a significant part of the sharp increase in number of cancer cases over the last 50 years is due to the fact that we have become more numerous, live longer than before, and that an increasing proportion of the population is older.

For some cancers, the incidence has decreased. This applies, for example, to cervical cancer, where the diagnosis and treatment of precursors has led to a reduction in people getting this disease.

Demonstration of the link between stomach cancer and the bacterium Helicobacter pylori, which is also an important cause of stomach ulcers, has led to new preventive treatment, and stomach cancer has gone from being a relatively common type of cancer to becoming a disease that now affects relatively few.

Some cancers can be caused by lifestyle. Tobacco use has led to a sharp increase in the number of lung cancer cases. This type of cancer can develop slowly over time, so even though many people have stopped smoking and the number of smokers is declining, this disease still affects many, and will continue to do so in the coming years.

Factors such as diet and/or obesity, lack of physical activity and alcohol are also behind a significant number of cancer cases.

More than 300,000 Norwegians have or have had cancer

The fact that more people are recovering from cancer and that those who have cancer are living longer with their disease means that the number of "cancer survivors" has increased sharply.

The high number of cancer survivors results in more people living with late effects from cancer treatment, and that the amount of people who become totally or partially disabled after cancer increases.

Furthermore, the fact that chronically ill cancer patients are living longer and longer will lead to increasing burdens, both for the primary and specialist health services.

Despite the fact that more and more people are surviving, it is still the case that a significant number dies of cancer each year. More than 11.000 Norwegians died of cancer in 2020.

Cancer of the lung, colon and rectum, prostate, and breast cancer among women accounted for half of all deaths due to cancer in 2020.

In addition, a significant number of deaths are caused by pancreatic cancer. Although this is not among the most common cancers, with around 900 cases a year, this cancer has a very poor prognosis and many die quickly after diagnosis.

The following six cancers accounted for the majority of all cancer cases in 2021. This amounts to over 55 percent of cancer incidence in Norway.

Breast cancer is the most common type of cancer among women in Norway.

Lung cancer is one of the cancers that are easiest to prevent.

Prostate cancer is cancer that occurs in the bladder neck gland in men that sits just below the bladder. It is the most frequent type of cancer in Norway.

Norway has one of the world's highest incidence of colorectal cancer.

The incidence of melanoma has increased significantly among men and women in Norway and internationally in the post-war period.

Cancer statistics for Norway
In the Cancer Registry's annual report Cancer in Norway, you will find information on incidence, mortality, prevalence and survival of cancer in Norway. Latest figures are from 2021.

Previous editions of Cancer in Norway can be found here.

Benign tumors consist of normal cells and are not characterized as cancer. They are usually delimited by normal tissue and will stop growing after a while. Malignant tumors on the other hand will continue to grow, and may eventually cause serious damage to nearby tissues and organs.

Cancer may also spread to other areas of the body by transporting loose cancer cells around the body in the blood and lymphatic system. These cells can then settle in completely different parts of the body and spread the cancer (metastases). In most such cases, the patient will eventually die of their cancer.

Recent research has shown that what is now perceived as one type of cancer should often rather be classified as several diseases on the basis of different incidence, growth pattern, and prognosis. This applies, for example, to breast cancer.

The Cancer Registry of Norway is a research institution. Our specialists therefore do not answer questions about diagnosis, assessment, treatment and follow-up of patients or their relatives.

Questions regarding this should be directed to your general practitioner (fastlege), treating institution or call the Norwegian Cancer Society’s counselling service Kreftlinjen (the Cancer Helpline)  tlf: 800 57 338 (800 KREFT)