The tomosynthesis studies in Bergen, the To-Be studies, are aimed at investigating whether screening with digital breast tomosynthesis is a better screening tool than standard digital mammography for BreastScreen Norway.
Last updated: 12/31/2021

In BreastScreen Norway, the national screening program for breast cancer, women 50 to 69 years old are invited to mammographic screening every other year.

Digital breast tomosynthesis is a mammographic imaging technique that differs from standard digital mammography because the x-ray tube moves in an arch over the breast and multiple exposures make projection images. The projection image data in tomosynthesis is sent to a computer where the data is reconstructed into planes (usually 1 mm) and slab (usually 10 mm), which give a 3D impression of the breast. In standard digital mammography, two-dimensional images are taken from two angles of each breast. 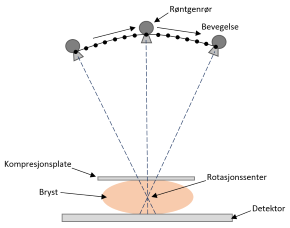 It is assumed that tomosynthesis enables radiologists to better separate different layers of breast tissue, which can make it easier to identify healthy breast tissue from diseased tissue.

Based on results from previous studies, it is not possible to determine whether it is favorable to use tomosynthesis as a screening technique in an organized, population-based breast cancer screening program. Several aspects need to be further investigated, such as the time it takes to read the screening mammograms, the demands for image storage space, rate of interval and consecutive breast cancer, and cost. There is also a need for knowledge about results of screening with repeated tomosynthesis.

The Tomosynthesis Studies in Bergen (To-Be) consist of two separate studies - To-Be 1 and To-Be 2. These studies aim to investigate whether it is favorable to use tomosynthesis as a screening method in BreastScreen Norway.

Both studies will analyze various early performance measures for screening, including the proportion of women recalled and diagnosed with breast cancer, as well as assess histopathological tumor characteristics. The studies will also investigate time spent reading mammograms and the costs associated with the use of tomosynthesis in screening.

The data used in the study comes from data collected from the breast centre at Haukeland University Hospital and BreastScreen Norway’s databases at the Cancer Registry of Norway.

To-Be 1 is a randomized controlled trial aimed at investigating early performance measures of the use of tomosynthesis in BreastScreen Norway. The Norwegian Research Council, the Cancer Registry of Norway and the radiology department at Haukeland University Hospital fund the trial.

Results of early performance measures for screening with tomosynthesis will be compared to those achieved with standard digital mammography. Strengths and weaknesses of the two different techniques will be determined and discussed.

All women who attended at the screening unit in Danmarksplass in Bergen during the recruitment period were asked if they wanted to participate in the study. Women who gave written consent to participate were randomized to screening with either tomosynthesis or standard digital mammography (see flowchart here). The participating women were followed for two years after screening to investigate rates of interval cancer and consecutive round breast cancer.

The project was completed in May 2021. Our main findings showed no significant difference in cancer detection between the two study arms (see selected publications below).

To-Be 2 is a follow-up single-group clinical trial where all women were offered screening with tomosynthesis. The Norwegian Cancer Society, the Cancer Registry of Norway and the radiology department at Haukeland University Hospital fund the study.

We are now analyzing the results and will follow-up the participating women for two years after screening to investigae rates of interval and consecutive breast cancer. See selected publications below.

The Steering Committee of the Consortium

The consortium for the To-Be studies consists of the Cancer Registry of Norway, the University of Oslo and Haukeland University Hospital. Each institution has appointed members to a Steering Committee.

Several people are involved in the day-to-day administration of the To-Be studies, both the Cancer Registry of Norway and at Haukeland University Hospital. The project group is led by the principal investigator.

In addition to the academic personnel at the participating institutions, several national and international scholars assist with advising, analyses and dissemination.

The project is approved by the Regional Committees for Medical and Health Research Ethics (REK), project number, 2015/424