Dr. Elisabete Weiderpass, Head of the Research Department in the Cancer Registry of Norway, has been elected new director of IARC, one of the most prestigious positions in the international cancer field. 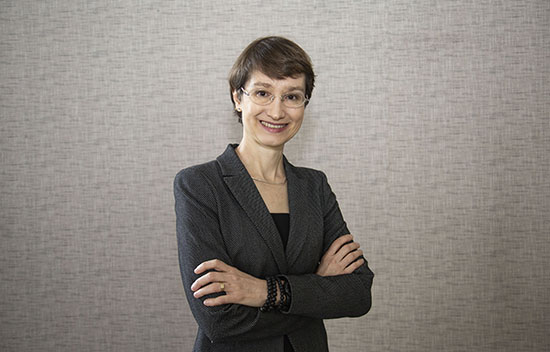 After a long and thorough process, the announcement came on May 17th - Dr. Elisabete Weiderpass is elected new director of the International Agency for Research on Cancer (IARC), the Cancer Research Institute of the World Health Organization (WHO).

"I am grateful for this opportunity and I will do my utmost to ensure that IARC continues its important mission working for good public health and relevant cancer research," Weiderpass said.

She points out that IARC has a long and important history as WHO's specialized cancer research agency for 50 years, and that the contribution to the knowledge of cancer has been very significant. And, although there are increasing numbers of actors and stakeholders in the cancer field, she believes that IARC still has a crucial role.

"IARC is needed more than ever to tackle the global cancer epidemic that we face," she says.

On Twitter, the Director General of WHO, Tedros Adhanom Ghebreyesus, welcomed Weiderpass to the WHO family.

- Congratulations to Dr. Elisabete Weiderpass, the first woman elected as director of IARC. I look forward to working with you, he wrote. 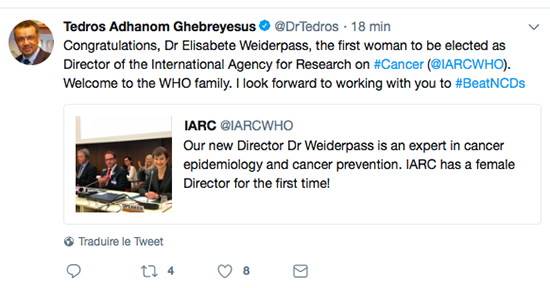 At the Cancer Registry of Norway, employees have followed closely the process of choosing the new IARC director closely.

"We send our warmest congratulations, both to our good colleague Elisabete Weiderpass, and to IARC, as we know they will have a highly competent, committed and knowledgeable director. I know hardly anyone who is this dedicated to science and good research, "said Giske Ursin, director of the Cancer Registry of Norway.

Ursin is proud that the Cancer Registry's research director has been selected as the new IARC director.

"These last days have been almost unbearably exciting, and I have been following the process closely. Now we are very excited about the outcome - and our worries about how to find a good substitute as head of our own research department will just have to come a little later”, she says.

- Prevention is the key

Cancer incidence is increasing worldwide, not least because of population growth and an increase in life expectancy.

Weiderpass believes that IARC has an important role in this aspect, and states that cancer is associated with disabilities and high morbidity and mortality, with overwhelming consequences for individuals, families, and societies.

“The cancer burden is high in all countries, but in particular in low- and middle-income countries, which often have a poor, inadequate infrastructure. Therefore, prevention is, and should continue to be the first line of attack in tackling the challenges posed by the global cancer epidemic” she said.

She adds, however, that since not all cancer cases can be prevented, early and accurate detection is also important, as is high quality cancer treatment offered in a cost-effective and affordable way to all in need.

Elisabete Weiderpass, MD, MSc, PhD, currently serves as leader of the Department of Research at the Cancer Registry of Norway and of the Genetic Epidemiology Group at the Folkhälsan Research Center in Finland.

She holds Adjunct Professorship positions in Cancer Epidemiology in Brazil, China, and the Islamic Republic of Iran, and is a Visiting Professor in Kuwait.

Wants an open and transparent IARC

One of the most important brands of IARC is the so-called IARC Monographs, with the classification of different substances, the extent to which these can be carcinogenic, and what types of cancers might be affected.

Since 1971, IARC has evaluated more than 1,000 potential carciogens, and the conclusions can be both unpopular and controversial.

Weiderpass is committed to the status of IARC as independent and credible, emphasizing the importance of transparency and around both IARC, as well as processes and individuals associated with the organization.

“IARC must remain a trusted organization in producing relevant science for public health policy and for public good, independent from vested interests” she said.