Home •
General About the Cancer RegistryNewsPublications
News Cancer among immigrants in NorwayFlexible Parametric Survival ModelsReconstructing web page30 401 new cancer cases reported in Norway in 201330 099 new cancer cases reported in Norway in 2012Annual report from the Norwegian Cervical Cancer Screening Programme 2012Cancer in Norway 2011The Norwegian Breast Cancer Screening Programme saves more than 100 lives per yearExperts on breast cancer screening gather in Oslo January 31, 2013Cancer in Norway 2010Differences in relative survival across 19 counties in NorwayHormone Replacement Treatment and mammography may explain raise in breast cancer in NorwayARCAGE a follow-up studyMore and more get cancer, and more surviveIncreased respiratory cancer risk among Canadian electrolysis workersNORDCAN- A Source of Nordic Cancer StatisticsSummary: Secondary screening using HPV tests in cervical cancer screening HPV test: Effective in the prevention of cervical cancer18 year age limit in solariums introduced in Norway‘Never married’ men still more likely to die from cancerCancer in Norway 2009New study on survival after ovarian cancer Still Danger of Asbestos Related Cancer among Navy Personnel, Despite RemovalMalignant Brain Tumors in AdultsModerate Risk of Incidence and Death due to Cancer Among Earlier Military Servicemen in the NavyDignified Termination of Duty for Director Frøydis LangmarkCancer survival: Norway in the Middle Cancer Statistics for 2009 will be published in June 2011Rune Kvåle has taken his Ph.D on prostate cancerGiske Ursin - New Director of the Cancer Registry of NorwayGood quality of long-term stored samples in the Janus Serum BankCancer in Norway 2008Both too much and too little treatment of prostate cancerCancer in children does not increase divorce rate Not possible to tie cancer cases to Sola Refinery NordICC study launched Will present study results at SolaDifferences in cancer incidence between occupational groupsAs much skin cancer as everAchieve important goals in life despite a cancer diagnosisPatterns and trends in cancer survivalStatus for the Cancer Registry’s survey of cancer incidence in Sørvær and Hasvik communitiesThe Registry examines cancer cases near Sørvær- Surgery should be offered to more lung cancer patientsTwo genes protective agains aerodigestive cancersElisabete Weiderpass elected new director of IARCDobbelgevinst av sunt kosthold; Mindre kreft og mindre hjerte/kar-sykdomCancer in Norway 2017: Trends and challengesEr vi forbi lungekrefttoppen blant kvinner?
Not possible to tie cancer cases to Sola Refinery

Not possible to tie cancer cases to Sola Refinery

There is 10 per cent more cancer in Sola and neighboring mununicipalities than the Norwegian average. However, the Cancer Registry of Norway is not able to connect this to the emissions from the refinery.

There is 10 per cent more cancer in Sola and neighboring mununicipalities than the Norwegian average. However, the Cancer Registry of Norway is not able to connect this to the emissions from the refinery. 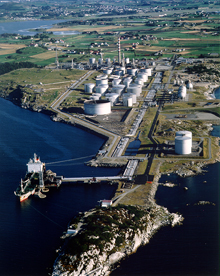 The Cancer Registry, commissioned by AS Norske Shell, has surveyed if there exists more cancer cases among the employees or those living near the closed Shell refinery, than in the general population. The results were presented for residents, earlier employees and the Press on Wednesday, June 17. 2009.

The Sola Refinery was operating from 1967-2000; converting crude oil into all types of petroleum distillates. Parts of such a process include the processing and production of agents that are known to be carcinogenic. Those cancer types that are overly represented in the study have no documented connection with the emissions linked to the refinery.

The spread patterns of the emissions were evaluated by the Norwegian Institute for Air Research (NILU). Residency information was delivered by the Population Registry and information about a possible cancer diagnosis came from the Cancer Registry of Norway. Numbers for emission of volatile organic compounds (VOC) and particles (PM10) were used as a basis in calculating added exposure for respectively benzene and polycyclic aromatic carbon (PAH). The levels were low compared to other pollution sources, such as car traffic and tobacco smoke for benzene and car traffic and wood burning for PAH.

There is no increased incidence of acute myelogenous leukemia, lung cancer or bladder cancer among those who were most exposed to respectively benzene or PAH from the refinery, neither in the group of employees or among residents.

The study shows that the total incidence of cancer among the residents (presently and formerly residing in Sola) lies around 10 per cent higher that the rest of the country. The same findings are in the neighboring municipalities and to a lesser extent from Rogaland County in general.

The increased incidence is mainly linked to cancer types that appear independent of the relevant emissions, or cancer types where the connection is not documented. Other factors are thought to play a larger part in the incidence of breast and ovarian cancer in women, prostate cancer in men and also in malignant melanoma, other skin cancers and gastrointestinal cancer.