Home •
General About the Cancer RegistryNewsPublications
News Cancer among immigrants in NorwayFlexible Parametric Survival ModelsReconstructing web page30 401 new cancer cases reported in Norway in 201330 099 new cancer cases reported in Norway in 2012Annual report from the Norwegian Cervical Cancer Screening Programme 2012Cancer in Norway 2011The Norwegian Breast Cancer Screening Programme saves more than 100 lives per yearExperts on breast cancer screening gather in Oslo January 31, 2013Cancer in Norway 2010Differences in relative survival across 19 counties in NorwayHormone Replacement Treatment and mammography may explain raise in breast cancer in NorwayARCAGE a follow-up studyMore and more get cancer, and more surviveIncreased respiratory cancer risk among Canadian electrolysis workersNORDCAN- A Source of Nordic Cancer StatisticsSummary: Secondary screening using HPV tests in cervical cancer screening HPV test: Effective in the prevention of cervical cancer18 year age limit in solariums introduced in Norway‘Never married’ men still more likely to die from cancer Cancer in Norway 2009 New study on survival after ovarian cancer Still Danger of Asbestos Related Cancer among Navy Personnel, Despite RemovalMalignant Brain Tumors in AdultsModerate Risk of Incidence and Death due to Cancer Among Earlier Military Servicemen in the NavyDignified Termination of Duty for Director Frøydis LangmarkCancer survival: Norway in the Middle Cancer Statistics for 2009 will be published in June 2011Rune Kvåle has taken his Ph.D on prostate cancerGiske Ursin - New Director of the Cancer Registry of NorwayGood quality of long-term stored samples in the Janus Serum BankCancer in Norway 2008Both too much and too little treatment of prostate cancerCancer in children does not increase divorce rateNot possible to tie cancer cases to Sola RefineryNordICC study launched Will present study results at SolaDifferences in cancer incidence between occupational groupsAs much skin cancer as everAchieve important goals in life despite a cancer diagnosisPatterns and trends in cancer survivalStatus for the Cancer Registry’s survey of cancer incidence in Sørvær and Hasvik communitiesThe Registry examines cancer cases near Sørvær- Surgery should be offered to more lung cancer patientsTwo genes protective agains aerodigestive cancersElisabete Weiderpass elected new director of IARCDobbelgevinst av sunt kosthold; Mindre kreft og mindre hjerte/kar-sykdomCancer in Norway 2017: Trends and challengesEr vi forbi lungekrefttoppen blant kvinner?
Cancer in Norway 2009

In this annual report the Cancer Registry of Norway delivers incidence data on the different cancer diseases and the latest survival data.

In this annual report the Cancer Registry of Norway delivers incidence data on the different cancer diseases and the latest survival data.

There were 27 520 new cancer cases registered in 2009: 54 per cent were among men and 46 per cent among women. The five most common cancer types, in descending order, are for men: prostate, lunge, colon, bladder, skin, and for women: breast, colon, lunge, skin and uterus cancer. Incidental annual variations may occur from one year to the next. In addition, previous year’s numbers will always increase due to delayed notification of cancer cases. When interpreting the cancer statistics, one should look at the cancer development over the past several years.
The incidence rate has increased by 7 per cent in men and three per cent in women from the past five-year period (2000-2004) until the last (2005-2009).

In men one sees the largest incidence increase in cancer of the prostate (23 per cent) and malignant melanoma (15 per cent). On the positive side, the rates for rectum and lung cancer show a small reduction of 5 and 4 per cent, respectively. The rates for colon and bladder cancer have levelled off and are only slightly changed in the period 2005-2009, compared to 2000-2004.

In women we see the strongest increase in incidence of lung cancer (13 per cent) and malignant melanoma (9 per cent). For the first time since the Cancer Registry started registering breast cancer, we saw in 2006 the beginning of a reduction in incidence. The five year period 2005-2009 shows a rate reduction of 4 percent compared to the previous five year period.
Norwegian women have one of the world’s highest cancer incidence of the colon and rectum. However, we are finally seeing a levelling off regarding these types of cancer as there is no increase in the rates the last five years compared to the preceding period.

This year’s statistics confirm a trend we have seen earlier: Survival continues to increase. At the end of 2009 nearly 200 000 Norwegians are alive after, at one point in time, having had at least one cancer diagnosis. This is an increase of over 60 000 persons since 1999.
One sees an improved survival in all the major cancers: breast, prostate, lung, and colorectal cancer.
This increase is for a large part a result of increased attention regarding cancer from the patient and the health care system and also from screening in the population. In addition, it may be linked to increased quality of treatment. 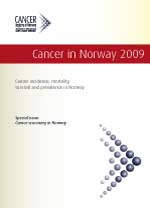