Genital warts are becoming less prominent in both Norway and Denmark - but the decline is far greater in Denmark than in Norway. “It is evident that Denmark has had a good effect from early multi cohort vaccination,” says researcher Mari Nygård at The Cancer Registry of Norway.

A new study compares prevalence of genital warts in Denmark and Norway in 2015, six years after the countries started offering the HPV vaccine for free to 12-year-old girls.

The study shows that fewer people got genital warts in both countries, but the effect was far greater in Denmark. The explanation the researchers point out, is that only Denmark offered vaccination simultaneously to a wider age range of girls.

Countries considering to employ a HPV vaccination program should look carefully into the differences between Norway and Denmark, the researchers recommend.

The study was published in the scientific journal Vaccine January 6th 2020, and can be downloaded here:

“The good news is that this is yet another study that indicates that the HPV vaccine works. In addition, it shows that Denmark has had a good effect from early multiple cohort vaccination - but unfortunately we also see that Norwegian girls and women does not have the same protection against the consequences of HPV infection as the Danish ones” says researcher and principal investigator, Mari Nygård at the Cancer Registry of Norway.

She fears that Norway's prevention of HPV-related diseases lingers at least a decade behind Denmark, as a result of the decision to offer the vaccine to only one age group for such a long time.

HPV is a highly contagious viral group that is transmitted mainly through sexual contact, and the majority of those not vaccinated are infected at least once during their lifetime. However, for most people, the body rids itself of the virus without the host even noticing that they have been infected. Some people, however, may develop genital warts, or even, over a long time span, cancer.

Denmark conducted a multi cohort vaccination from early on, while Norway waited until 2016 before older girls received an offer of free vaccination.

When the HPV vaccine was introduced in 2009, the prevalence of genital warts for men and women was higher in Denmark than in Norway. In 2015, the picture was reversed. 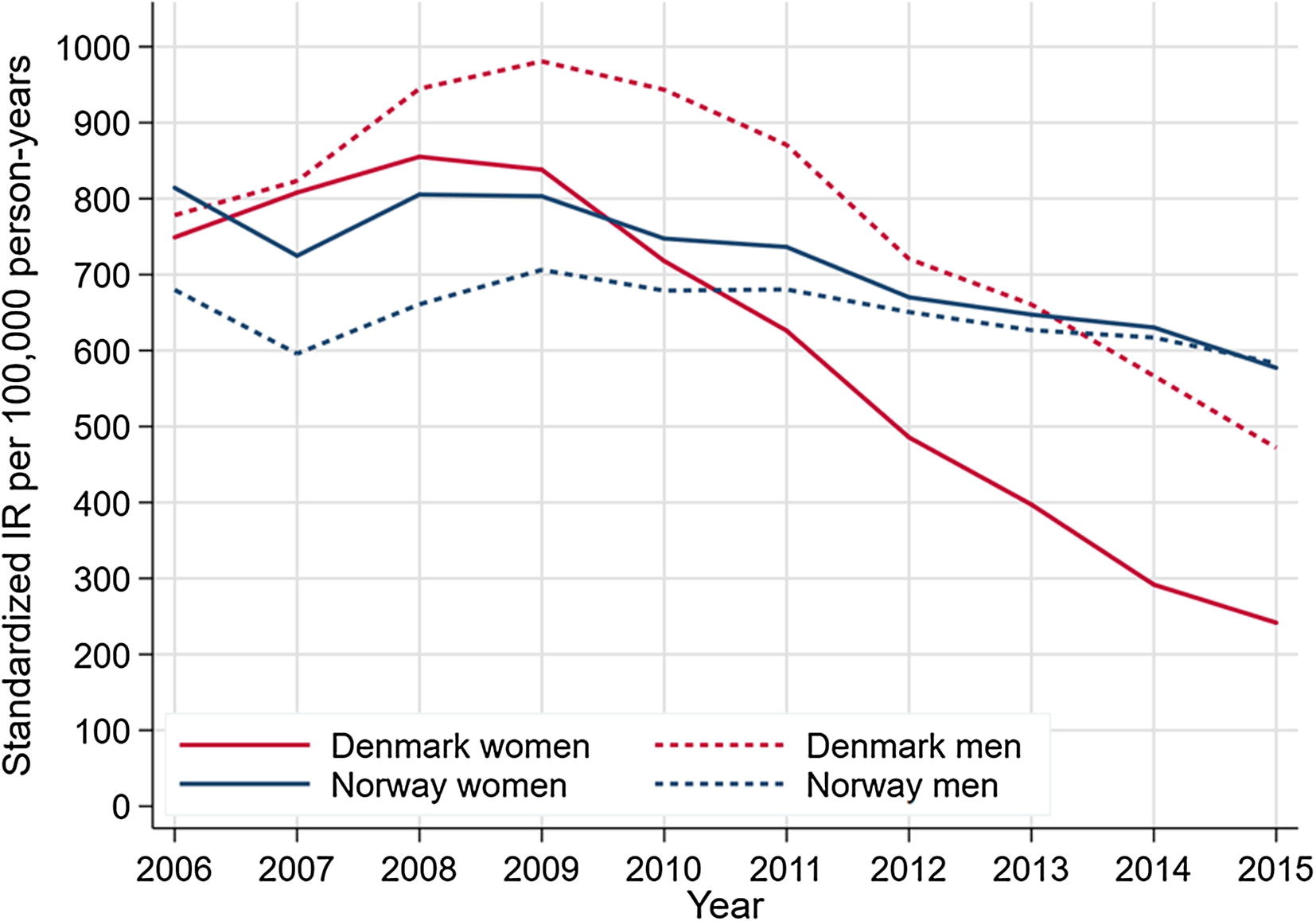 “It is gratifying to see that the prevalence is declining in both countries, as this indicates the vaccine is effective. The steeper decline in Denmark also indicates that the combination of routine vaccination of 12-year-olds, and catch up vaccination of older girls appears to be the strategy that provides the greatest health benefit. This is important knowledge for countries considering to introduce HPV vaccination as a public program”, says Nygård.

HPV affects both women and men.

“Therefore, it is very interesting to see that the prevalence of genital warts is declining among men, even though they have not been systematically offered vaccine in any of the countries in the period we have investigated. Our interpretation of this is that men is indirectly protected against genital warts by the fact that fewer women have a HPV infection after vaccination. The catch up program has made the decline of genital warts more visible among the men in Denmark than in Norway” says Nygård.

The child vaccination program in Norway changed HPV vaccine in 2017, and now uses a vaccine that protects against cervical cancer only, and not specifically against genital warts.

“It takes less time to develop genital warts than cervical cancer, and because of this, the incidence of genital warts is a good indicator on how well the vaccine performs in a population. Because both diseases are caused by HPV, the study gives us reason to believe that vaccination will also reduce the future incidence of cervical cancer in both Denmark and Norway. The different vaccination strategies in the two countries will probably lead to an earlier decline in cancer rates in Denmark, she says.